In part one of Predicting Players in Non-Linear Games, I talked about how you can influence which puzzles your players will go for first by making certain options more accessible and noticeable to them. In this post we will be discussing what to look for in your beta tests and how to expect the unexpected.

One thing that all escape room owners can all agree on is that if players are given the ability to do something, they are going to do it. It doesn’t matter how alien the concept may appear to you, there will be someone down the line that will attempt ANYTHING to solve a puzzle. The human mind is an incredible thing and some players will come up with some truly spectacular ways to try and solve the puzzle, and sometimes… it will work. 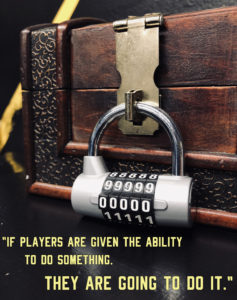 This is why beta testing a room is so vital to the design process. You might think that you have the perfect design for a room but the moment you put a player inside it, they will find flaws in everything that you have made. If there are numbers spread randomly around the room, then expect the players to randomly guess the correct 5-digit code out of a group of 10 numbers and open a lock way before they are supposed to.

If it is an outlier event, then don’t worry too much about it. But if you find that the behavior keeps happening over and over again during your beta test, then you know there is something in your room that is leading players to taking that particular course of action. Interview each player afterwards and ask them how they solved it. If they point to something and explain that they used a clue in a way than you intended; good! You have found something that needs to be changed. Alter the prop so it can’t be used in that way or change the puzzle to exclude that option from its solutions. Keep testing and changing until all of your puzzles can only be solved the way that it is intended.

Though it is true that each person is unique, groups of people tend to follow certain patterns of behavior. Believe it or not, people become more predictable when you put them in a group. There are tons of psychological studies done on peer pressure and group mentality. But most of them agree that if enough people in a group react a certain way to something, everyone else in the group will follow along/react the same way.

This behavior is great for all of us that are trying to predict what a person will do. So, at the end of the day, the best thing you can do is beta test your room again and again with as many different types of groups as you can find. Show it to people that love escape rooms, people that dislike them, and people that don’t even know what they are. When you start having groups reacting in the same way, that’s when you know that you really got ‘em!

Coming up next, we will discuss an important problem with non-linear games… the dreaded BOTTLE NECK! Till then, good luck to you.