It has been 2 years in the making and The Psych Ward is here!

THIS IS NOT YOUR AVERAGE ESCAPE ROOM. THE PSYCH WARD IS AN INTERACTIVE GAME OF DEDUCTION, TRUST, AND BETRAYAL WITH ESCAPE ROOM, BOARD GAME, AND IMMERSIVE THEATRE ELEMENTS.

Now you may be asking yourself, but what am I ACTUALLY getting myself into? If you are feeling nervous, or would just like to know more. Here is the inside scoop on our newest game:

The Psych Ward is a 60-minute game, taking place at Misarie Psychiatric Hospital in the early 1970s. Dr. Griffin, the head of the Psych Ward, created his own experiment for a select group of patients. His goal is to unlock the true powers of the brain, which many people believe is impossible. In order to put his patients at the heightened mental state that he needs, he has derived a sub-test where they patients believe they are going through a social experiment to see how they handle trust and betrayal while under the pressure of solving a series of challenging and psychological puzzles.

Under the authority of Dr. Griffin, the test becomes an interactive game of trust, betrayal, and deduction between two teams: Sane and insane patients. Players will be randomly assigned a diagnosis. Through the game, patients will complete challenges and tests to gain points for their team. Sane players do not know who else is sane and are trying to figure out who is on their side. The insane players are trying to remind undiscovered and steal points from the sane players by infiltrating and pretending to be sane. 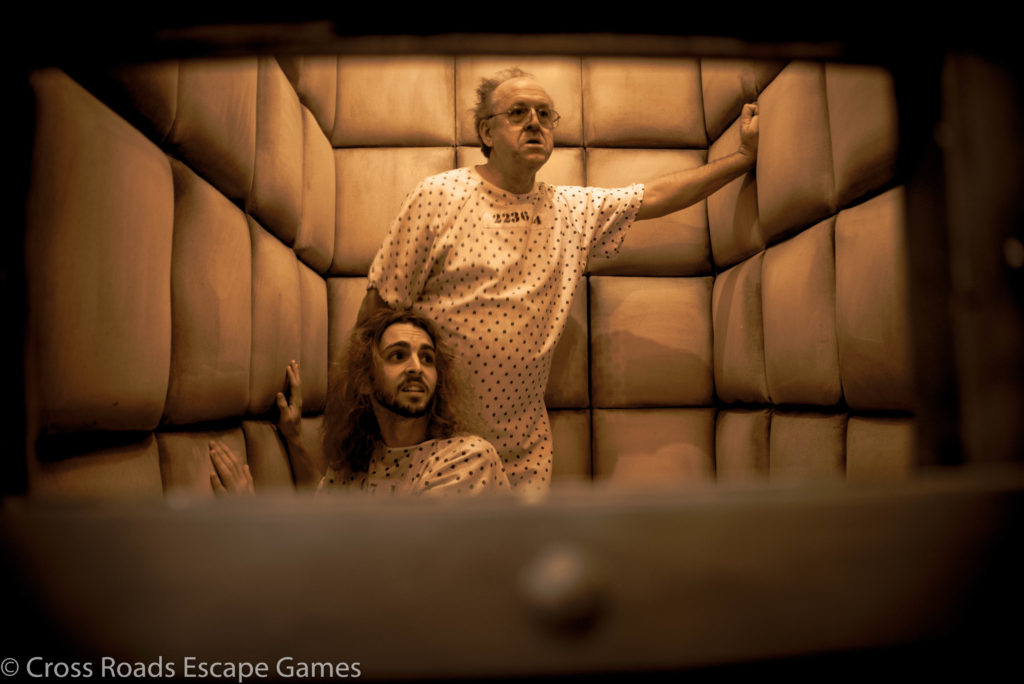 The Psych Ward takes on a traditional escape room idea, but brings it to the next level with a competitive and strategic layer. Players will still get the thrill of solving puzzles and interacting with an immersive environment, but they will also be more selective with whom they work with and how much information they want to share. Inside the padded cell, players also get one-on-one time with another teammate to strategize and work together. This could help build alliances, or lead to future backstabbing.

If you have ever played the popular social deduction games like Werewolf, Mafia, or Secret Hitler, the strategy and game mechanics are a lot like those.

# of Players- 5-8. This is a PRIVATE game. We will not put your group with strangers. A minimum of 5 players are required to play this game.

Ages- This game is recommended for ages 16+. No one under the age of 14 will be admitted.

Want a leg up on the competition? Check out our trailer for the game and watch VERY CAREFULLY.

No Proscenium: “This game is a genre bender, the kind of thing that has the potential to revolutionize the emerging escape room industry…”

Esc Room Addict: “The attention to detail and the number of easter eggs were abundant in this room which increases the replayability since each experience will never be quite the same for each individual person.”

Nightmarish Conjurings: “All in all, it has been a while since I have experienced an escape room with such a unique twist and I truly found this to be a groundbreaking new adventure.”

Halloween Every Night: “I have to say this was one of my favorite escape room experiences because it was so different. I tend to be an observer of human nature and I enjoyed the process of deducing who, in fact, were the traitors among us.”

Nerd Reactor: “Cross Roads Escape Games has created another innovative and immersive room that sets itself apart from other escape rooms. The game design is unique and fresh, and the production value is topnotch, making you feel like you’re inside a mental hospital.”

Haunting.net: “One thing is certain: Cross Roads has another wholly unique and engrossing immersive escape room with which to challenge adventurous Southern Californians.”

Make a booking soon and see what everyone is raving about!