The Zen of Being a Clueless Clown

Greetings and salutations dear reader. I am Zoltar the Great, the seer of secrets, and today I am your guide to the rest of your life as a clueless clown. Yes, dear reader, even though you have failed to escape the Fun House and now find yourself eternally employed as a clown, there is still so much to look forward to.

Under the big top there are thousands of jobs that must be done every day, and not all of them are suited for a magician. After all, while they were off solving puzzles and using their enormously large brains, was it not you that was shouting the loudest? While they were trying to carefully inspect their clues, was it not you that was juggling the fastest? That’s right! There are many things that a clown does that simply makes no sense to a magician. So, if the job requires a bit of nonsense or general whimsy, a magician will simply fall flat. And because of that, there will always be a need for clowns.

It is simply a fact of life that clowns have more fun than magicians do. I mean… sure… you could just play the game and solve the puzzles needed to escape; but a clown will take time to smell the roses along the way. For a clown, it isn’t enough to simply get a secret spinning decoder used to translate ancient and esoteric hieroglyphics into a usable clue; a clown must spin that secret decoder several dozen times simply because it spins. Oh, how wonderful it must feel to be a clown! 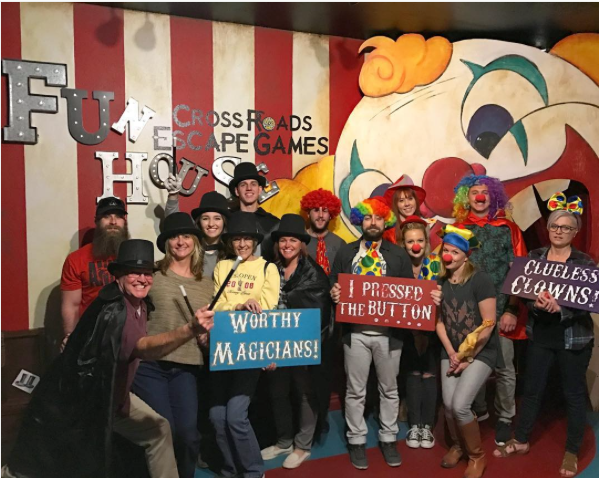 See, don’t you feel better now? Some people get so carried away with the idea of “winning” or “losing” and they forget that the most important part of the Fun House is… the FUN. Win or lose, magician or clown, as long as you had fun playing, that is all that matters. So, go ahead and shine on my crazy diamonds… shine on.

Zoltar’s Neighbors What I Look For In An Escape Room: Geoff