Many years ago, when Cross Roads Escape Games was young, we had a practice puzzle in our lobby that allowed guests to get into the puzzle-solving mindset. The puzzle was pretty simple; some signs around the room provided hints for a four-letter lock on a jar full of candy. This puzzle was great practice for multiple reasons: guests learned how to search the room for clues, think critically, and most importantly, line letters upon a lock and pull down to open. But the time came when our lounge required a makeover and when it was renovated, the puzzle was removed.

However, people kept asking for the puzzle to return. Enthusiasts enjoyed having another puzzle to solve, while new players liked a crash course in learning how a puzzle works. We went to work trying to think up a new puzzle to take the place of the old one, one which would fit into the new room’s design but be easy to manage (as we already have three other games to look after as well.)

Admittedly, several years passed before we focused on the practice puzzle. In the meantime, we had created the mobile mini escape game, The Box, as a companion piece to our full-length game, The Psych Ward, brought to life the immersive theatre performance The Séance, and lived through 2020. But always in the back of our minds was this little practice puzzle.

One day, one of the game masters suggested returning the old puzzle to the room. Though this would have been the easiest course of action, I didn’t know what happened to all the elements we used for the original puzzle. Not willing to ignore the call for a practice puzzle when a simple solution was only a storage search away, I set my mind on a suitable replacement.

I went through a few different versions of what we finally installed in the room. The first version involved painting statues’ solid colors and a legend to put these statues in order. This required a few too many hands-on elements, though, as we also use the lobby as a party room for birthdays and other celebrations and would need to be put away. This would also pose the problem of the statues not fitting into the room’s theme, their colors clashing with the design. And surprisingly, the biggest reason was that affordable and durable statues in the specific design we needed were nearly impossible to come by.

I decided to change the puzzle from statues to something we could mount on the wall and fit in with the steampunk-ish theme of the room. I wanted to adorn the wall with some dapperly-dressed skulls. Initially, in my mind, these skulls in their costumes would be painted a solid glossy black to look like statues carved from marble or painted wood. We worried that this would be a little too intimidating for some of the younger escape room guests and be a little too dark as a focal point. We settled on a warmer brown tone (that we soon found out was discontinued. Things can’t be too easy, after all!) I found costumes for each of them in playful yet straightforward colors to catch the eye and make the puzzle feel more joyful. We’re not only about horror around here. 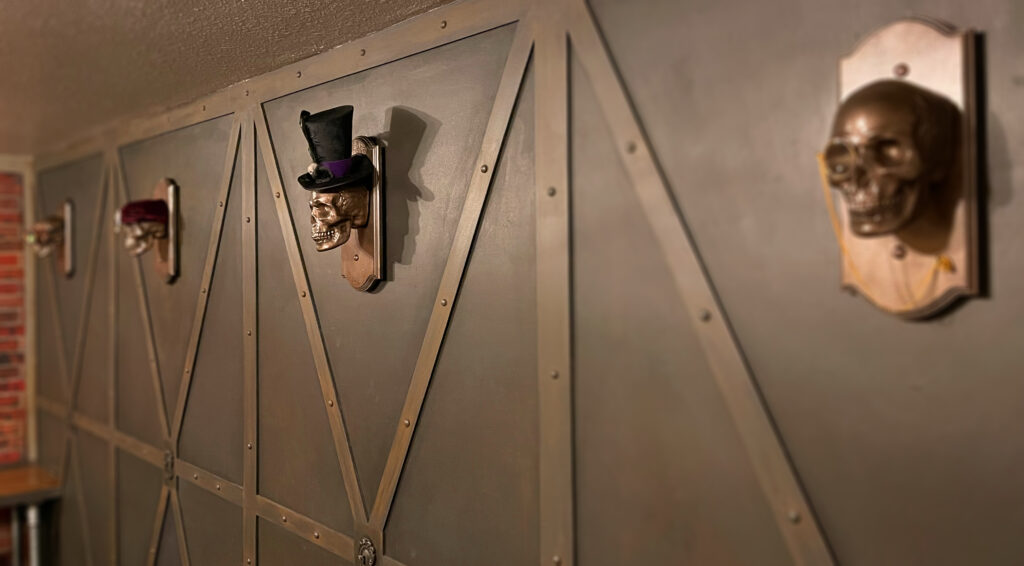 We wanted to take this puzzle a step further. It would be simple enough to look at the skulls and put them in order based on their costume; it isn’t necessarily a fun puzzle. We decided to go electronic.

Most recent escape rooms involve more tech and fewer combination locks. Like our Psych Ward, for instance, which does not contain a single combination lock, players will most likely never even get their hands on a physical key. These newer games rely on different types of puzzles where answers are input through buttons, dials, switches, or other physical actions. This can make a game much more immersive if it fits in well with the theme of the game, as well as possibly reduce reset time.

With this tech-trend of escape rooms in mind, we wanted our puzzle to accomplish two things: first, teach players how to interact with tech-based puzzles, and second, have essentially no reset. This is where we had a problem. How do you create a puzzle that doesn’t require someone to reset after it’s solved? Our solution was not to create just one puzzle but one puzzle with three answers. We designed our puzzle to cycle through three different solutions, so even if the knobs are set to the previous answer, the next group will still have to solve the puzzle before earning their prize. 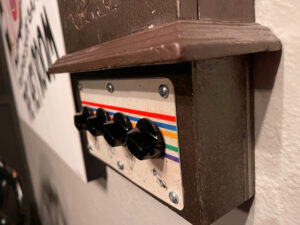 Though you would think this three-solution puzzle was enough work for us, we were not entirely satisfied. Since we didn’t want the puzzle to be constantly active, we needed the players to turn the puzzle on. The first step to the practice puzzle is to search the room for the clue to activate the puzzle itself. Of course, we also weren’t going to make that easy. We hid a clue in the room to help players get started; it just takes some observation, association, and imagination. All I can say is that some things are not as they seem.

Next time you stop by to play one of our games, arrive early to check out the new practice puzzle in our lounge!