Play any game between 3/15-4/05/20 to enter to win great prizes for teams with the best escape time!

Does the NCAA tournament get you into a competitive spirit? GOOD! If you play a game at Cross Roads Escape Games anytime between March 15th– April 5th you will be competing for amazing prizes! 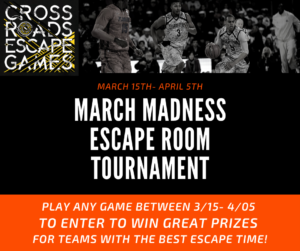 For the first time in Cross Roads history, we will be bringing in leaderboards for each of our 3 games. If you are one of the FINAL FOUR teams on the leader board by April 6th, you will win an amazing prize! With the final four teams getting prizes in each our games, that makes 12 total prizes you can win!

Here are our categories and prizes:

All you have to do to enter is play a game anytime between March 15th-Apirl 5th, 2020! We will be posting our leaderboards every night to our Instagram and Facebook stories. Make sure to follow us to stay updated with your status! Winners will be announced and contacted on April 6th, 2020. The person who made the booking is the team captain and will be the one contacted if your team makes the final four!  All prizes will be either mailed or emailed.

How do I enter?

How do I check the leaderboards?

How do I claim my prize?

If your team is still on the leaderboard by April 6th, your team wins that category! We will reach out to the team captain, AKA the person who made the booking, and mail or email them the prize. It is their responsibility to split it amongst their team.

Do I pick my prize?

Each category has its own sponsored prize. You will win the prize of that category if your name is still listed on the leader board by April 6th.

Will I stay on the leaderboard?

Is there a recommended team size?

Nope! You can come with any size team as long as it is between our minimum and maximum for that game. But here is a tip- larger teams mean more minds, so it might help to bring a large group!

If I have already played your games, can I still enter?

Of course! The Hex Room and The Psych Ward are designed to be re-playable games so you can definitely come back and play our March Madness Event.

How many hints can we get in the games?

For the 3-week March Madness event, Game Masters will only give a max of 3 hints per game! If you need more then 3 hints, don’t worry, we will still help you along, but you will not qualify for the leaderboards.

We Need To Talk About Leaderboards

I’m going to come right out and say it: I hate leaderboards. Some people may call this controversial, but they said the same thing about my List of 10 pop-culture words I hate, Why I hate internet personality quizzes, and My list of controversial and inconsequential dislikes.

Whenever people ask me about the record for one of our rooms, I always hesitate to answer. From the moment someone hears the record for a room they start making assumptions about how their game is going to go. In my experience, fastest time records are almost always outliers from the average experience of players. Most groups will not come close to those arbitrary numbers markered onto the whiteboard in the back. 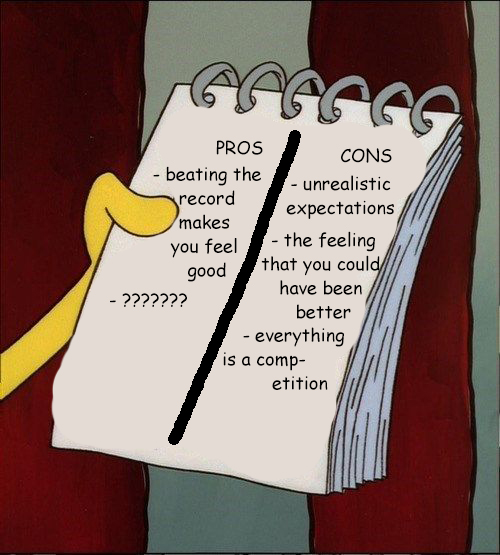 A record will give a group unrealistic expectations of how they should be playing and can only lead to disappointment.

When a group goes in knowing the record for a room, suddenly they have expectations. They start comparing themselves to this mythical group of 12-armed supergenius octopi that were able to solve a fairly difficult and puzzle-heavy room in less than 30 minutes. They start feeling like they’re falling behind because they aren’t walking out of the door five minutes after the game started.

You should be celebrating  that your group did they best they could.

A leaderboard changes the escape room from being your group versus the game, to your group versus other groups versus the game. Suddenly you’re playing against absolute strangers who have no idea you exist, trying to beat them at something they don’t even know you’re playing. Now, I like a little competition every now and then; Like with games such as The Psych Ward where I’m pitted against my friends in an experiment of trust and betrayal, or in competitions where I know I have an even playing ground like geek trivia where all of my teammates know everything that isn’t music or cult movies so I can pick up the slack and eat pizza. When you escape from an escape room, your group should be celebrating your hard work, communication, and puzzle-solving. There should be laughing, cheering, smiling, and fist-pumping (if you still do that kind of thing.) If you pit yourself against a stranger’s score, there will still be a tinge of disappointment that you didn’t do better.

Leaderboards won’t tell you how much fun the record-holders had.

Another reason I dislike the idea of a “record” is that it feels counter-intuitive to creating a fully immersive escape room experience.  Part of the fun of escape rooms is getting to lose yourself in a new world for an hour. Sure, it’s important to solve the puzzles and try to escape, but I believe you should also take enough time to appreciate your surroundings. Take some time to appreciate the humor and self-aware nature of The Fun House. Take some time to become a horror movie character and believe your surroundings in The Hex Room. Take some time to figure out what is really going on in The Psych Ward, despite the amount of times the nurses and orderlies keep telling you there is no other experiment going on. Believe me, escape rooms are a completely different experience when you allow yourself to be part of the room.

Now that escape rooms are popular enough to become plot points in TV shows like Bob’s Burgers, Portlandia, and Crazy Ex Girlfriend, companies are being more mindful of making their games immersive and unique. If you speed through a game at a breakneck pace, there’s a good chance you’re going to miss things along the way. You should take some time to laugh at a funny code for a lock or marvel at how a complicated puzzle came together. You should take time to interact with any interactive elements in the room. Allow yourself to get lost in the moment. After all, you came to this escape room for fun. Which brings me to my final point…

You came here for fun.

Nobody likes to lose. But when your hobby includes locking yourself in themed rooms with friends in a race against time, there’s a strong possibility that eventually you’re going to experience a loss. I’m here to tell you that’s okay. In fact, a loss every now and then is expected. What’s important is to remember to enjoy yourself. If you have the most fun you can possibly have in a game and then beat the record? Well, that’s just the icing on the cake. The happiest groups we see are normally the ones focused on playing the game who escape with only seconds remaining, not the ones trying to break a record. 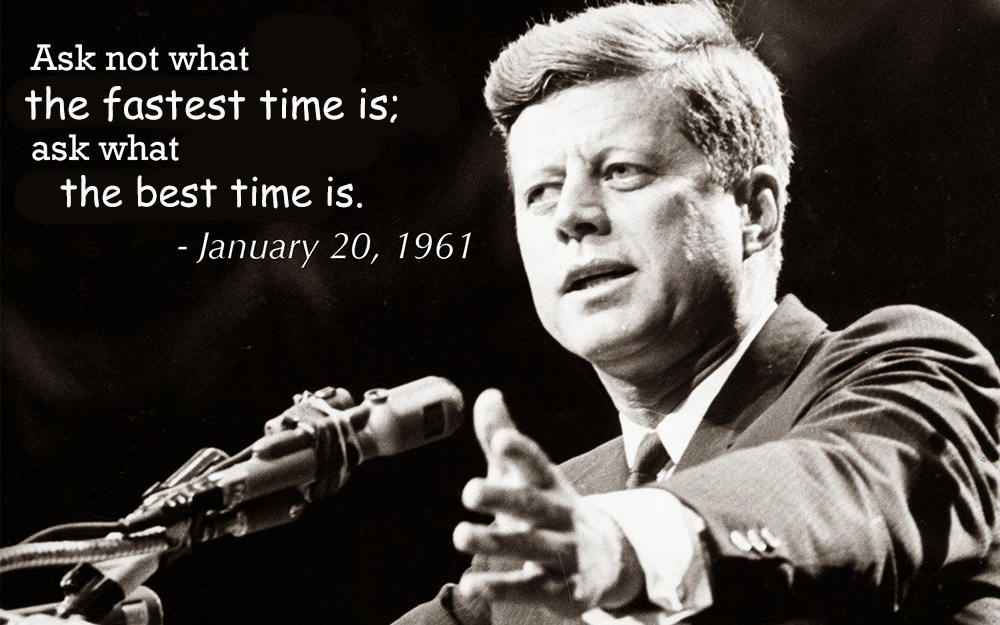 I hope, dear readers, that you can agree that I have made some pretty compelling points. If you own an escape room or are an avid player, you may feel differently. What are some reasons you think leaderboards are a good idea for escape rooms to display? Let us know your thoughts in a comment below!